Assemblyman Kevin Byrne (R,C,I,Ref-Mahopac) and the family of late FDNY Fire Chief Kevin Byrnes were among the attendees paying tribute to our state’s fallen heroes at this year’s NYS Fallen Firefighters Memorial event at the Empire State Plaza on Monday, October 10. 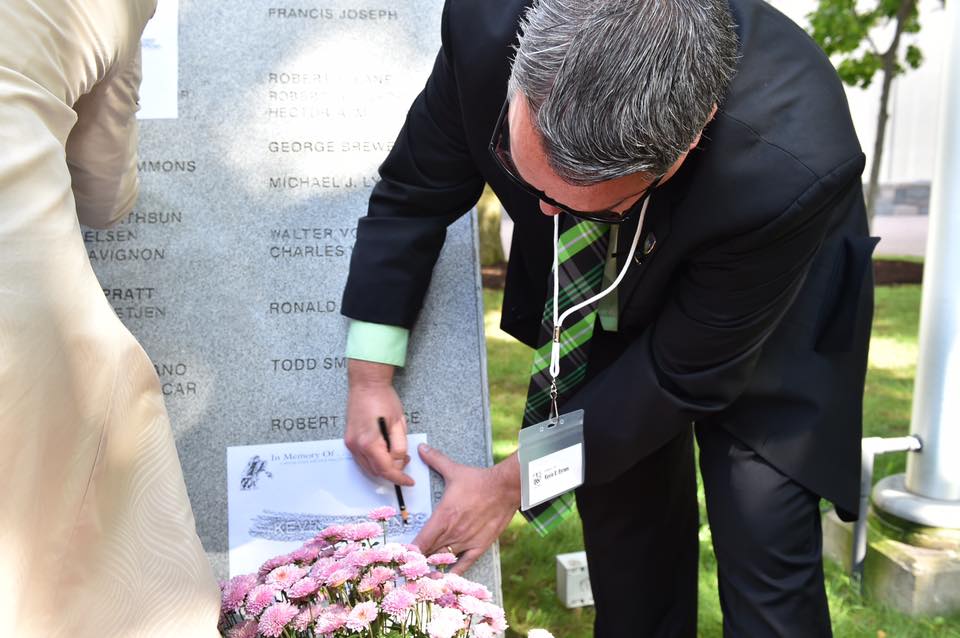 On Monday, October 10, Assemblyman Kevin Byrne (R,C,I,Ref-Mahopac) attended this year’s NYS Fallen Firefighters Memorial Ceremony at the Empire State Plaza. The event, which commemorated the addition of 118 new names to the monument, offered attendees the opportunity to honor the spirit and legacy of the brave men and women who made the ultimate sacrifice in the line of duty and served as a bittersweet reminder of the selflessness and heroism demonstrated each day by our state’s firefighters.

Of the 118 names added to the memorial this year, 112 were firefighters who tragically lost their lives due to injuries and illnesses suffered as a result of recovery efforts on September 11, 2001 in New York City. The ceremony represented the 20th annual commemoration of New York’s fallen firefighters, and was held as part of Firefighter Appreciation Day and Fire Prevention Week. Including the names added on Monday, the memorial now honors 2,424 men and women who lost their lives courageously protecting New Yorkers from harm.

This year’s additions to the memorial included four local heroes of the FDNY, Edward Tietjen and John Vaughan of Mahopac, Thomas Van Doran of Brewster and Thomas Kelly of Kent. In addition, Yorktown resident Kevin Byrnes was in attendance to honor the memory of his late father, FDNY Battalion Chief Kevin Byrnes, who tragically lost his life in 2004 due to September 11th-related illness.

"My father dedicated 39 years of his life to the people of New York City as a member of the FDNY. We are grateful that New York State recognized his sacrifices, and the sacrifices of the other 112 FDNY members who died as a result of the rescue and recovery efforts in the days following 9/11,” said Yorktown resident Kevin Byrnes. “Sadly, that list of first responders continues to grow, and we keep those first responders and their families in our prayers."

"It was an honor and a privilege to attend last Monday’s Fallen Firefighters Memorial Ceremony at the Empire State Plaza, and to have the chance to pay tribute to the brave men and women who put their lives on the line each day to protect the citizens of New York State,” said Assemblyman Byrne. “Fighting for the rights of our first responders has been a top priority for me as a state Assembly member. I will remain committed to ensuring our firefighters are afforded every support resource available moving forward into this year’s legislative session, and beyond.”